The Casino Bern with its high roof is a landmark on the Kirchenfeldbrücke.

The casino in Bern was renovated from the ground up and given back its original room structure. The new lift played a decisive role in this. The architect and monument conservator explain why.

For 110 years, the Casino has been a social and cultural focal point of the Federal City. To replace the old casino, which had to make way for the parliament building, the architects Paul Lindt and Max Hofmann erected a proud building in the 'Bernese style,' with sandstone facades and mighty tiled roofs, next to the bridgehead of the Kirchenfeld bridge. On account of the limited plot of land, they arranged the main rooms - the large concert hall and the Burgerrat hall - on the first floor. On the ground floor they placed the vestibules, the cloakrooms, and the spacious restaurants and social rooms. The building was constructed by the Burgergemeinde and opened in 1909. 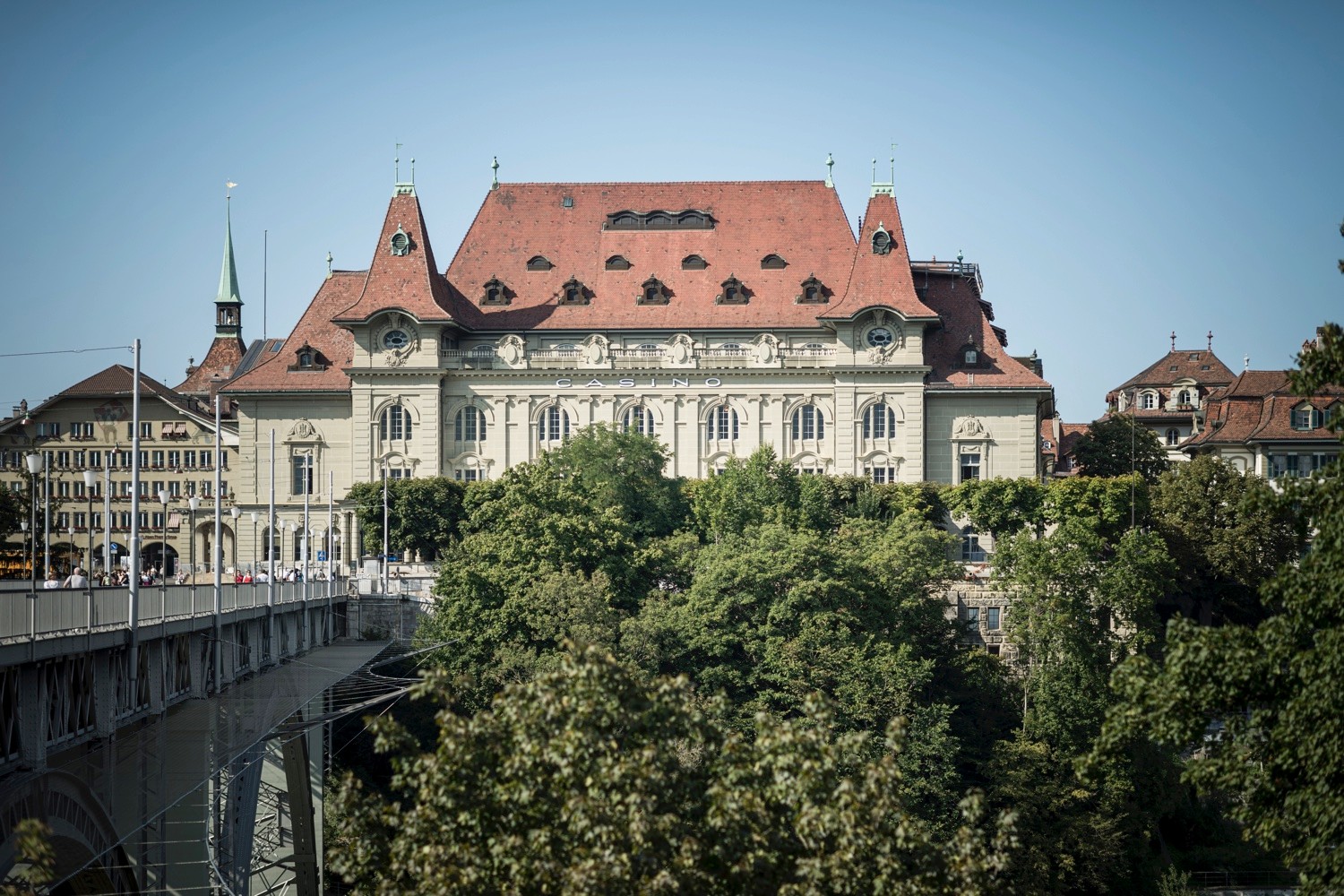 Over the decades, the building was remodelled several times to adapt it to the changing needs and tastes of the period. In total, no fewer than 25 building measures are on record in 100 years. The alterations to the ground floor were particularly hard on the building, as the restaurants were subject to the greatest changes. The original room structure was largely destroyed or only existed in rudimentary form. The installation and constant expansion of the administration in the former tenant's flat in the eastern part also had a heavy impact. 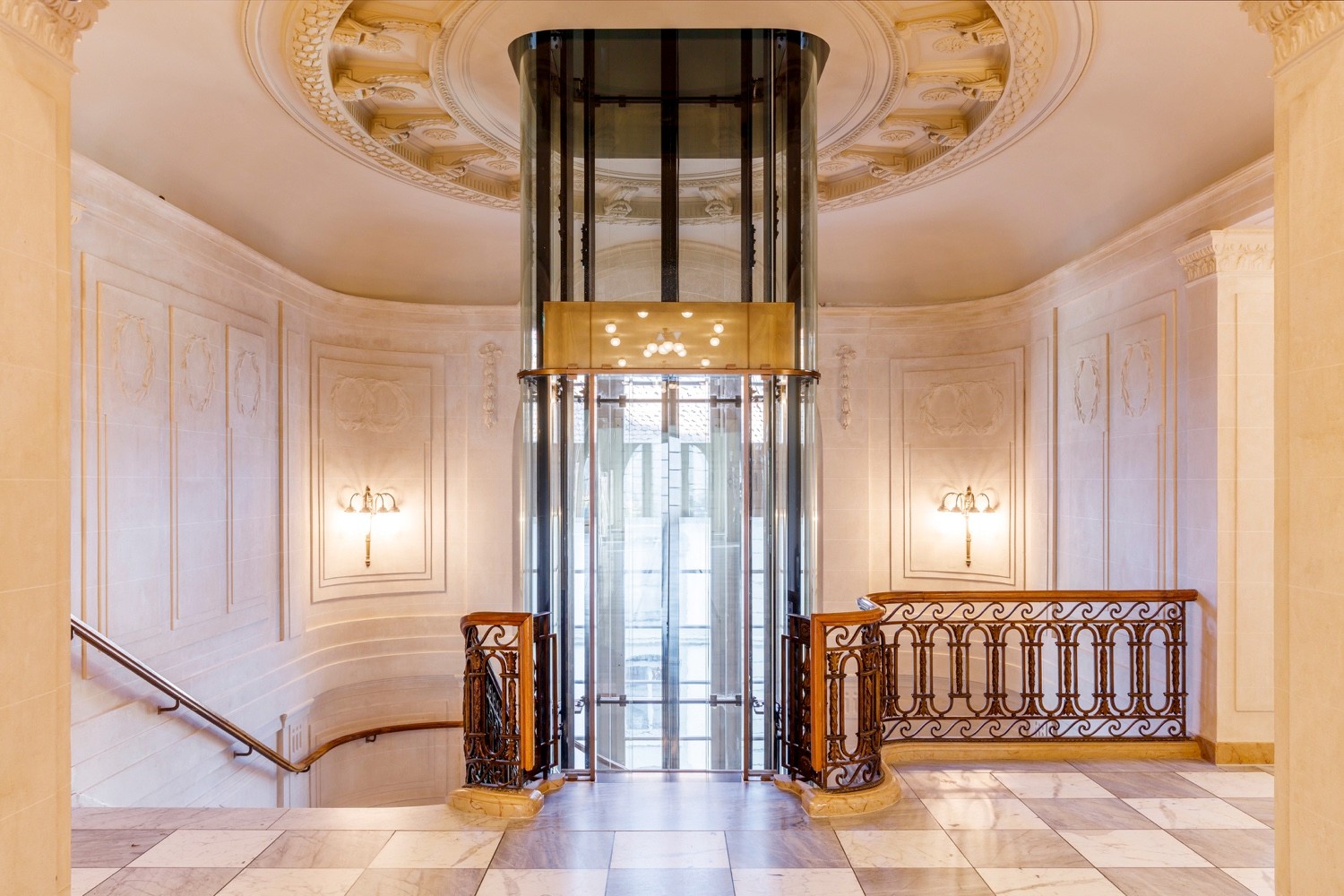 Between 2017 and 2019, the local community renovated the building, which is so important for it and the city of Bern. Based on a 'thesis competition,' in 2013 Campanile + Michetti Architects were awarded the contract, which they worked on in close collaboration with the heritage conservation authorities. For the city's monument preservation department under Jean-Daniel Gross, the renovation
of the casino was one of the largest and most complex projects of recent years. It exemplifies the importance of close cooperation between the client, the architects, the monument preservation authorities and the contractors. In order to give the casino back its original spatial structure, a castling was necessary. A new lift plays a central role in this.
The liberation strike
"The architects', idea of moving the administration from the east area of the casino to under the roof in the west was the liberating blow," recalls monument conservator Jean-Daniel Gross. This made it possible to do away with the long corridor known as the 'Klötzligang'‘, which had cut the ground floor in two. This cleared the way for restoring the original spatial and functional structure on the ground floor of the casino. "The idea came to me at the Skyscraper Museum in New York," recalls architect Claudio Campanile. There he saw a comparison between offices lined up and stacked. Here his previous certainty that the casino administration should be located in the east area began to waver. Although up to thirteen storeys are hidden behind the sandstone facades, the mighty roof and the large retaining wall, no one would call the casino on the edge of Bern's old town a 'skyscraper'. However, the stacking of different uses, which architect Campanile studied in the museum in New York, was essential for
the casino in Bern: the 'Klötzligang' virtually turned vertical and became an elevator that - for the first time in the 110-year history of the building - connects the public rooms on all floors. 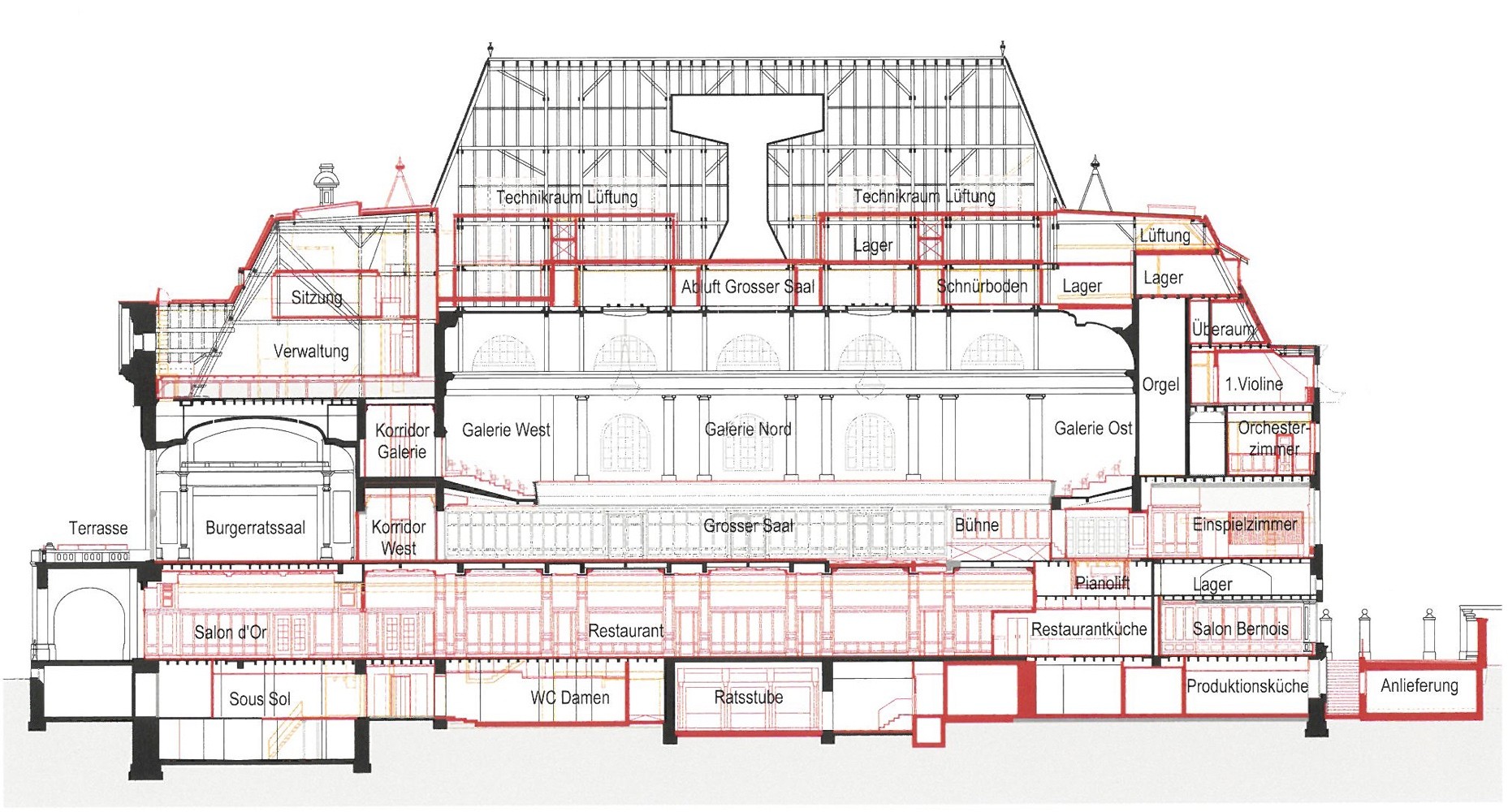 The right place for the lift
The filigree lift construction, made of bronze profiles and glass, stands as elegantly as it does naturally in the eye of the gallery staircase in the western entrance hall. The important role it plays can be seen in the lift, but it does not push itself into the foreground. Is this what the ideal lift in a listed building looks like? There is no general answer to this question. "A lift is like a pole through the house," says Jean-Daniel Gross. That means you do not install it where there are important rooms. In the old town, old lavatories often lend themselves to the installation of lifts: they are arranged vertically one above the other and usually near the staircase. In this way, a lift can be 'de-emphasised'. Another widespread possibility is the use of an existing vertical space, such as a stairwell, as previously used in the casino during earlier conversions. In this case, the building fabric remains untouched, apart from the necessary technical interventions. However, the spatial impression suffers: the lift is a visible element at a key architectural point. 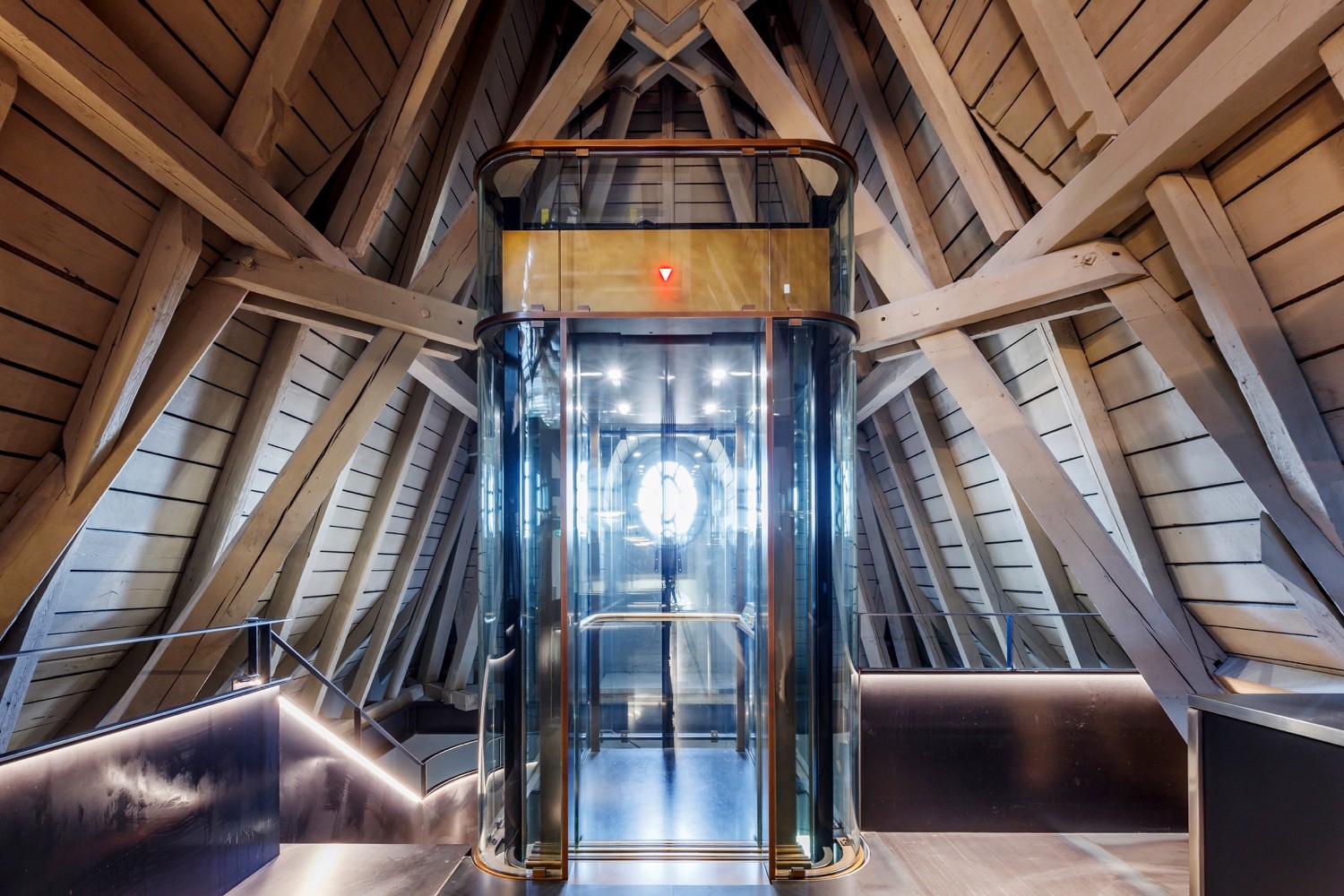 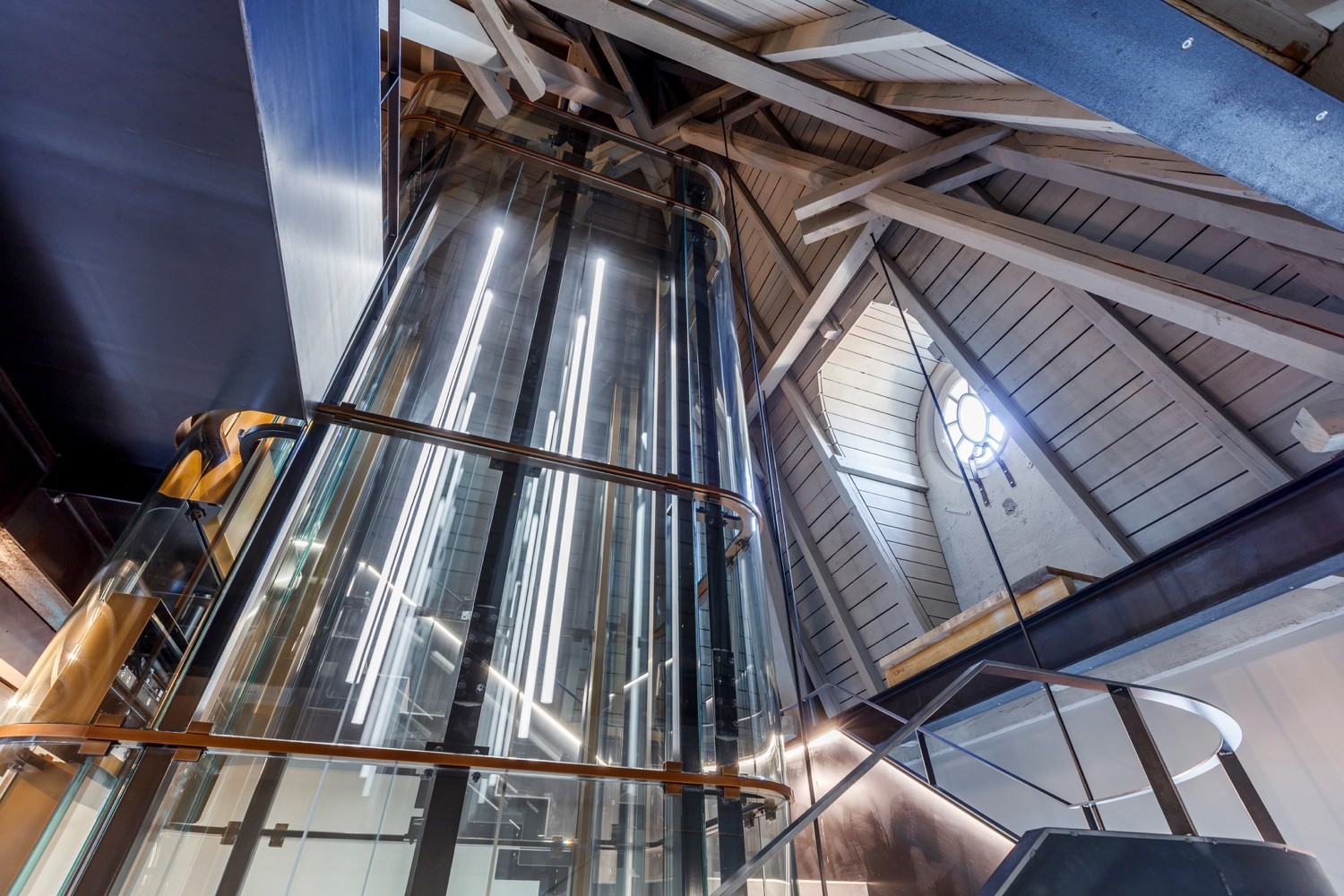 This special role of the lift is justified at the casino. Today, barrier-free accessibility must be guaranteed as a matter of course. The social significance of the building, the festive concerts and congresses, must ensure the representative accessibility of the rooms. Vertically, this used to be exclusively the overhanging staircases, but today an attractive lift is just as much a part of it. For the monument conservator, another point was decisive: the staircase in the west, in the eye of which the lift has now been installed and extended from the basement to the roof, has a counterpart in the east - without a lift. There, the original effect can still be experienced. "It is not just a matter of making something 'beautiful', but of getting it conceptually right," emphasises Jean-Daniel Gross.
Planners and entrepreneurs hand in hand
The conceptually correct solution can only be implemented well if all those involved pull together: the architect, the monument conservator and the contractor. With the lift, this is exemplified for example in the materialisation. The architects planned the metal construction of the lift in architectural bronze to match the bronze-painted railing. Emch's specialists took up this ball and developed their own proposal - with even more filigree profiles than the architects had envisaged. In order to be able to implement these plans in the required quality, the work had to be put out to tender accordingly. It was not enough to simply issue a call for tenders for the lifts; separate calls for tenders were needed: one for the goods lifts, which any manufacturer could supply, and one for the representative glass lift customised by Emch.
The efforts have paid off, as a lift ride from the ground floor up to the roof proves. In the noble cabin, one first travels along the prestigious staircase through the festive foyers of the first and first floors before piercing the stucco ceiling and continuing the journey to the fourth floor. The metal and glass construction of the lift almost reaches the wooden roof truss of the stair tower, and one can imagine the construction challenges that were posed here. The roof structure was removed so that a crane could insert the lift in three parts into the eye of the staircase with millimetre precision. 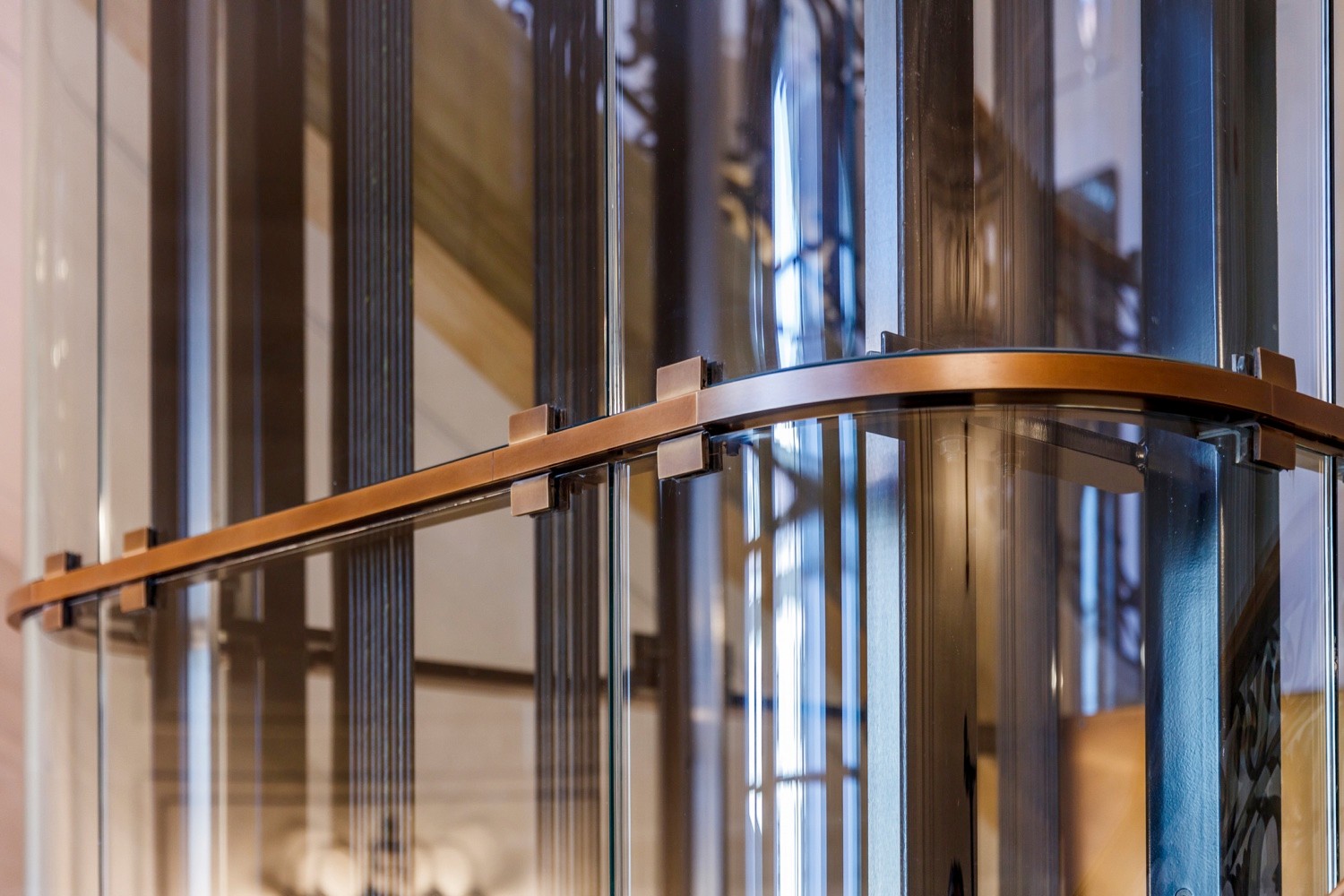 In contrast to the festive atmosphere on the lower floors, raw carpentry, painted in light beige, characterises the administrative rooms under the mighty roof of the west wing. Two new windows in the flat roof area allow plenty of light into the large volume where the meeting rooms sit as glass caskets. Up here, operations are organised in the multifaceted rooms below - true to the motto: everything from one source, everything under one roof.
Complete renovation of the casino 2017-2019
Casinoplatz 1, Bern
Building owner: Burgergemeinde Bern
Architecture: Campanile + Michetti Architects, Bern

The lift is part of the routing