The lift is part of the routing

How do you move through a building? On the stairs or in the lift?

Bernhard Aebi: I take the stairs 99 percent of the time. That has to do with the fact that I got stuck in a lift twice. The first time it happened to me was in Freiburg, in Botta's bank. We got stuck there for about half an hour, which was really unpleasant. The second time was in Saas Fee, at three in the morning ...

Wayfinding is an essential topic in architecture. What role does the lift play?
Bernhard Aebi: The lift, like the stairs, is part of wayfinding. The experience of riding the lift is important: how do you get into the lift, what do you touch, what happens when you ride? In a glass lift, for example, you have a view. In a closed lift, the question is what happens inside the cabin. It can be small irritations that accompany you during the time you are in the lift and trigger an emotion. It could be the shape of the handrail or a mirror that sits in an unexpected place.

At what point is it decided what role a lift will play in a project?
Bernhard Aebi: First of all, it is important that the lift is in the right place. The location then determines what you can do with it. If you absolutely want to create something special and have to find the space in the building for it, then the lift is in the wrong place anyway. In the south wing of the main station in Zurich, which we are currently renovating, the lifts are located in the access layer. Their function is classical service. Here, the landing door and the portal, both made of wood, create emotions. Originally, we had even planned to make the entire interior of the lift cabins out of wood - the ride in the wooden cabin would have been a surprise, like in the film 'Grand Hotel Budapest'. 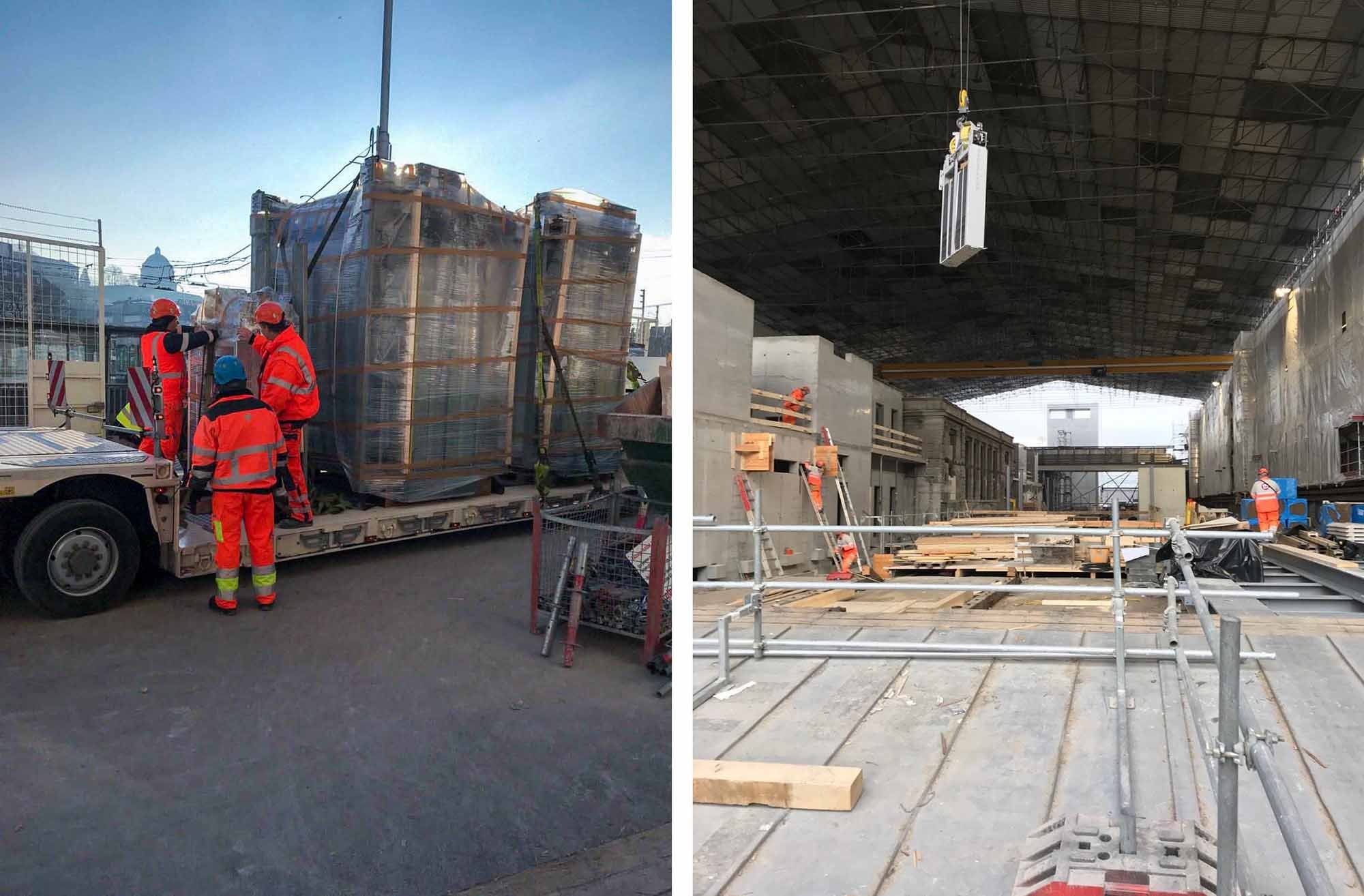 At what stage of the design do you contact the specialist?
Bernhard Aebi: As a rule, contact is made relatively early on, usually at the preliminary project stage. It is important that the technical aspects of a lift are right from the start: How big is the shaft? How is the lift driven? There are many possibilities, but often there are situations that are difficult to solve. In the renovation of the Federal Customs Administration in Bern, the lift locations are given for historical reasons. We have to see how we can install a lift and what influence that has on the rest.

Daniel Steiger, how are the architects prepared in each case?
Daniel Steiger: This varies greatly and is related to how experienced an architect is, especially when it comes to building in existing structures. Whether it's a new building or a conversion, there's a big difference. In a new building, the lift is often thought of as part of the building services. You take the standard catalogue and plan the lift in somewhere. When building in an existing building, the situation quickly limits you. I soon notice whether an architect is thinking about feasibility for the first time or whether he has experience. When the concept comes before the technology, when the architect says: "For conceptual reasons, the lift has to be right here," that's when the exciting stories emerge. I hardly know of a project by Aebi & Vincent Architects where this has not been the case from the very beginning. At the Langenthal Theatre, for example, where we were allowed to plan the lift for Aebi & Vincent, we noticed right from the start that the architects' demands were very high. Many would not even dare to formulate such wishes if they had not already had corresponding experience in working together.

In the beginning, are the topics more technical or creative?
Bernhard Aebi: An important issue is certainly the feasibility of the design idea. In the Langenthal, we actually wanted to have both the cabin and the shaft constructed from expanded metal - without glass. We thought it would be nice to feel the draught on the lift ride. We looked into it intensively and also found a solution - and then the standard changed and we had to give up the expanded metal idea and switch to glass and look for a different effect, which we found with a water-matt foil lying in the glass, corresponding to a misted-up pane. 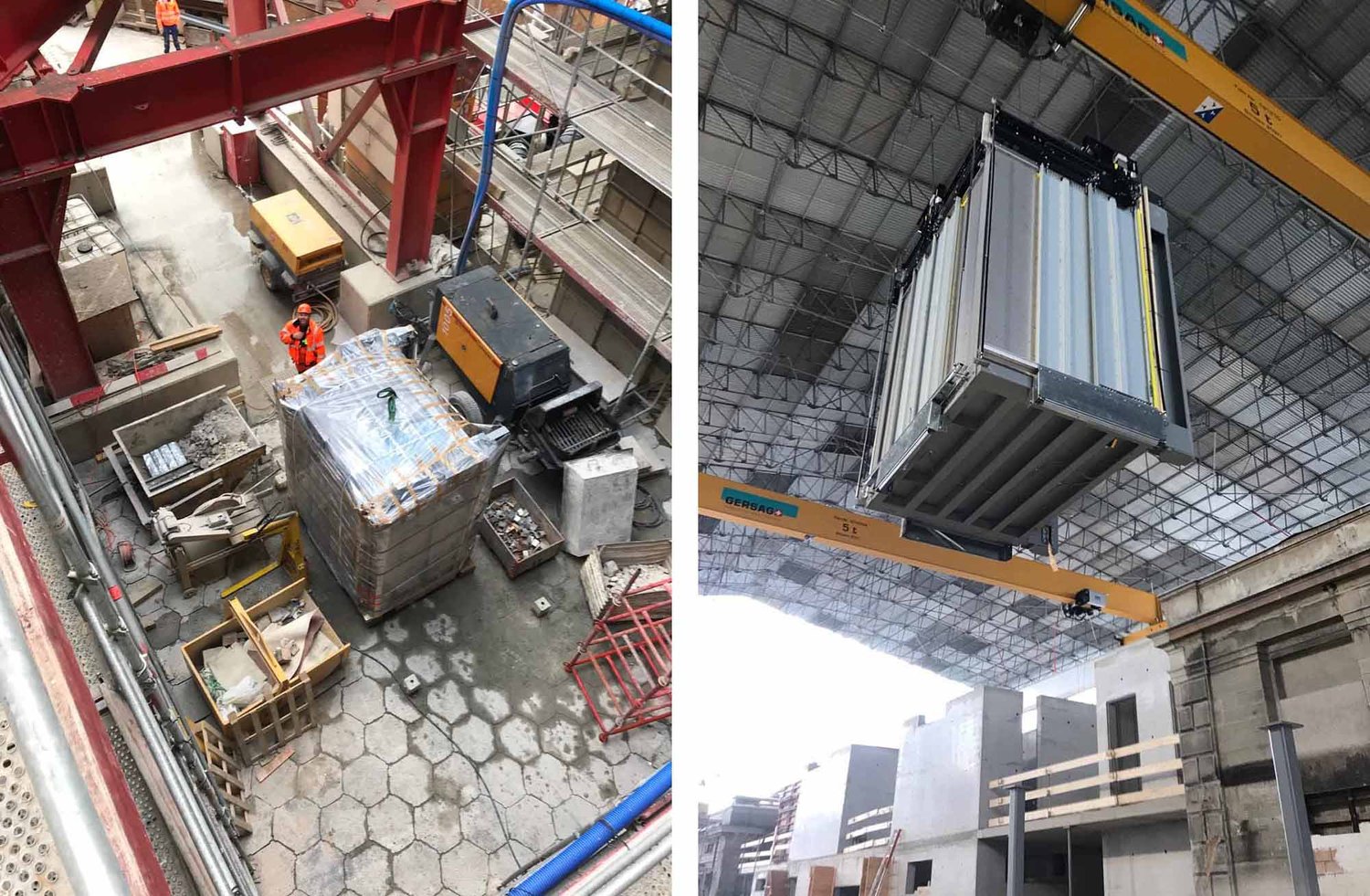 I imagine that standards severely restrict the freedom of design, especially for a technical installation such as a lift.
Bernhard Aebi: Of course there are standards, and you have to comply with them; everything in construction is standardised, but if you only build according to standards, then every house looks the same. The exciting thing is to fulfil a standard and at the same time make something out of it. If you have a partner who also enjoys this and can do it, then there are many possibilities for a little 'tightrope walk'.

Are you tightrope walkers?
Daniel Steiger: Obviously (smiles). It's not like we have a magic box, but we do have the possibility to make a layout and put the whole thing together technically in such a way that something unique emerges. In addition, as an SME, we have a certain fool's freedom that the corporations hardly have any more. We don't have a compliance department that steps on our toes when we walk a tightrope somewhere.
Bernhard Aebi: The first time I planned a lift with Emch, I was surprised how agile they were! The big industrial groups have little interest in anything special; they are focused on mass business. Emch has a different philosophy. That is also the case with good architects.

Do building owners also need to be particularly aware of a special lift?
Bernhard Aebi: Architecture has to do with communication and emotions. As an architect, you take the client along with you when you develop a project. In the Langenthal, they were disappointed when the idea of expanded metal could not be realised. They would have liked that too. If the lift is unusual, the client sees the added value - if it makes sense. No one likes to make a special lift just to make it special, but if the lift is part of the emotions in the house, then it is a matter of course. 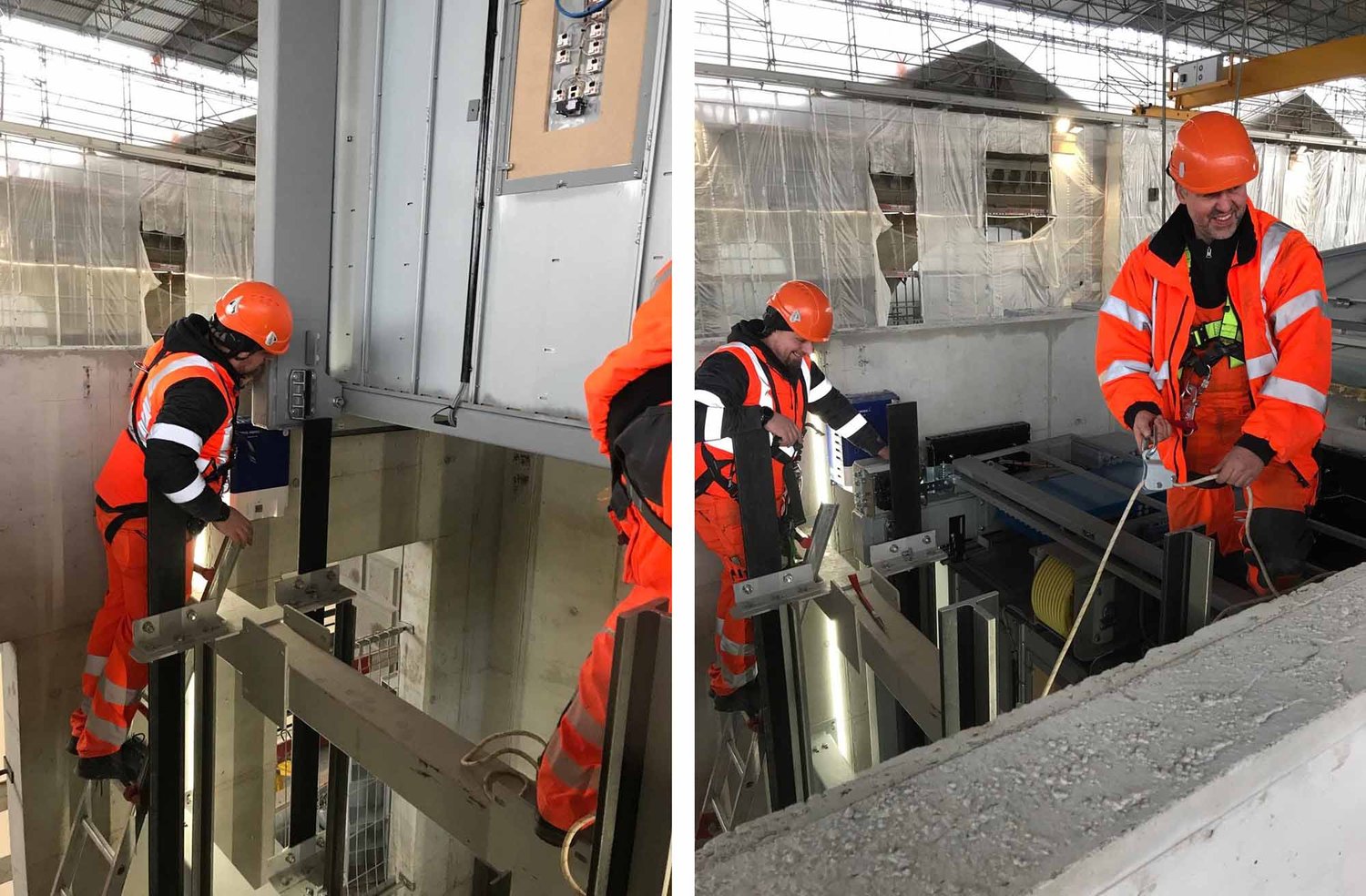 How can you guarantee that the planned quality is guaranteed when a lift is put out to public tender?
Bernhard Aebi: We tender very precisely so that in the end we get what we want. Between awarding and execution, however, there is still a certain amount of development, and that is probably more intensive and creative with Emch than with another company. Of course it is easier to develop something together and then award it as a direct contract, but that is difficult today with large, often public projects.
Daniel Steiger: We actually weren't able to build the facility in the Langenthal. There is always the danger that projects we develop together with the architects will be snatched away from us.
Because usually they have to be put out to public tender - and how do you put something out to tender without defining it exactly? Especially if you already know exactly what you want. Then you have to describe it precisely. So anyone can build a plagiarism.

Does it often happen that the lift planner says: "I can't"?
Bernhard Aebi: With Emch it's not: "You can't," but: "You have to try it differently." A counterproposal comes along - the typical ping-pong. When you've been on black ice together, suddenly an idea comes up that you didn't have as an architect. When someone tells me something doesn't work, I'm always extremely tempted to pick it up again. Then it gets exciting, like with the expanded metal in the Langenthal. It's a great pity that we couldn't realise it.
Daniel Steiger: It would be really impressive to build a lift one day in which you can feel the draught in the cabin, but for that you need triple safety, and the sensors for that have not existed until now. Now the 3-D monitoring systems are so perfect and certified that you could actually operate an open cabin, a platform, as a lift. The Louvre in Paris has one: you go up and down and don't have a cabin around you. Such changes in standards, which are usually driven by the companies, are always exciting for us. It then always takes a certain amount of time for us to find the niche. At the moment, for example, we are working on several projects in which we drive shaftless onto the roof. At the bottom, the lift is a normal lift; at the top, it pushes through the roof. The monitoring required for this is only possible with the new technical systems. Looking for such solutions is exciting, and it's satisfying to be able to say after two or three years: "Now we've got it." 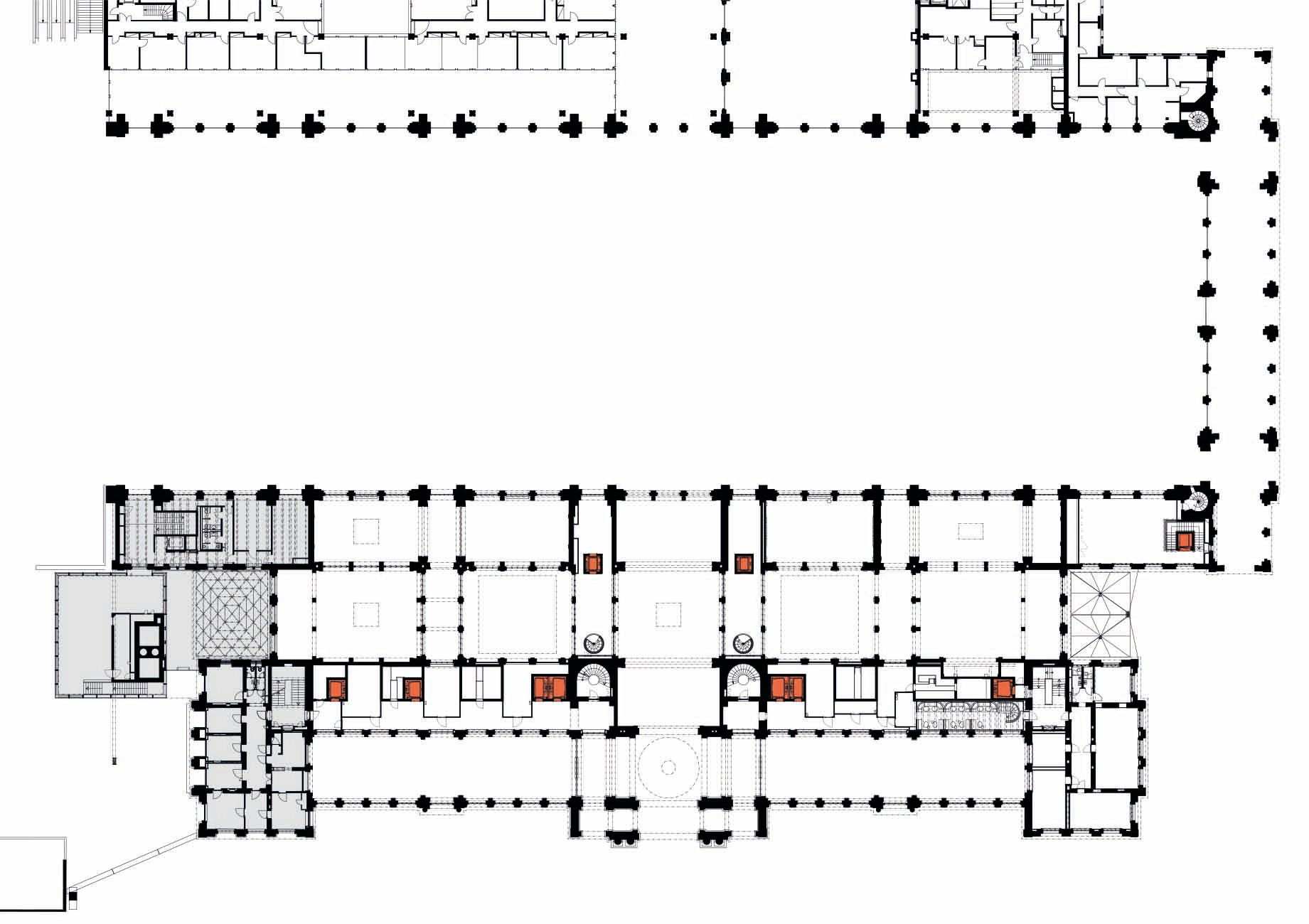 What is the architect's dream for the perfect lift?
Bernhard Aebi: A few years ago I would have said: "A skyscraper in New York". Today I'm not sure if other things wouldn't be more interesting. I would find it exciting to build a lift as a box that transports you from A to B, not only vertically. MVRDV once presented a library project with lifts that can move in all directions by means of magnets.
Daniel Steiger: If the Thyssen principle with the linear drive, which allows several cabins in the same shaft, becomes technically established, it will completely change the architecture. Then there will no longer be the 'core problem' of having to reserve more space for the lifts as the height increases. And there will be no more corridors because you can drive your cab somewhere and end up at your front door. You will no longer meet anyone.
Bernhard Aebi: I find technical development exciting, but the question is what you do with it. I think the lift is important as a social place. That's why I think it should be more than just a lift. If you live in a house with a lift, you get to know your neighbours differently. Social contacts develop in an extremely intimate setting.
Daniel Steiger: A kind of forced socialisation. That's why it's sometimes so oppressive.
Bernhard Aebi: That's why I always take the stairs!