The lift as the backbone of an imaginary yacht club

The neo-baroque building of the Hotel Eden au Lac in Zurich - an important landmark in the building frontage of the right bank of Lake Zurich.

For over 110 years, the neo-baroque building of the Hotel Eden au Lac in Zurich has been an important landmark in the building frontage of the right bank of Lake Zurich. A lift leads directly to the 'Jachtklub' in the dome.

The building is not particularly large, but the impressive dome with its attached lantern sets it off effectively in the long row of different buildings. What you do not suspect from the outside is that under the dome there has recently been an imaginary yacht club - the result of the latest renovation of this traditional house. In 2014, it became part of Michel Reybier's clinic and hotel group Aevis as part of the Victoria Jungfrau Collection. The latter recently integrated it into his La Réserve group, which now comprises seven luxury hotels. The transformation of the old four-star Eden au Lac Hotel into the new La Réserve Eden au Lac triggered considerable investment. 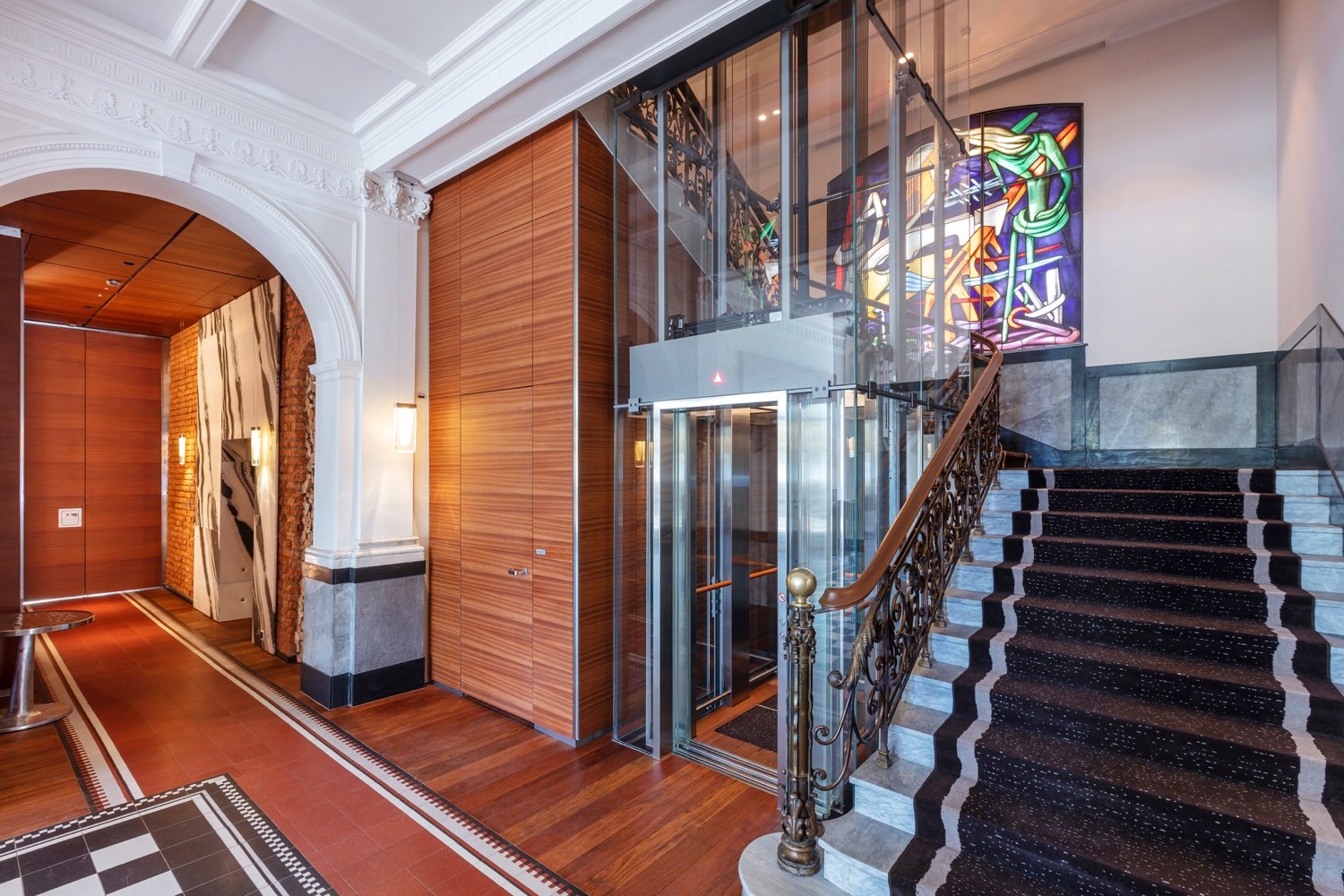 Staged way up in the glass lift
From the outside, the house with its magnificent facade and the characteristic blue-and-white striped sun blinds is largely unchanged. Inside, however, with the exception of the shell, no stone was left unturned. Here, not much of the original substance of the 110-year-old house was left anyway, and so it was given a completely new look. 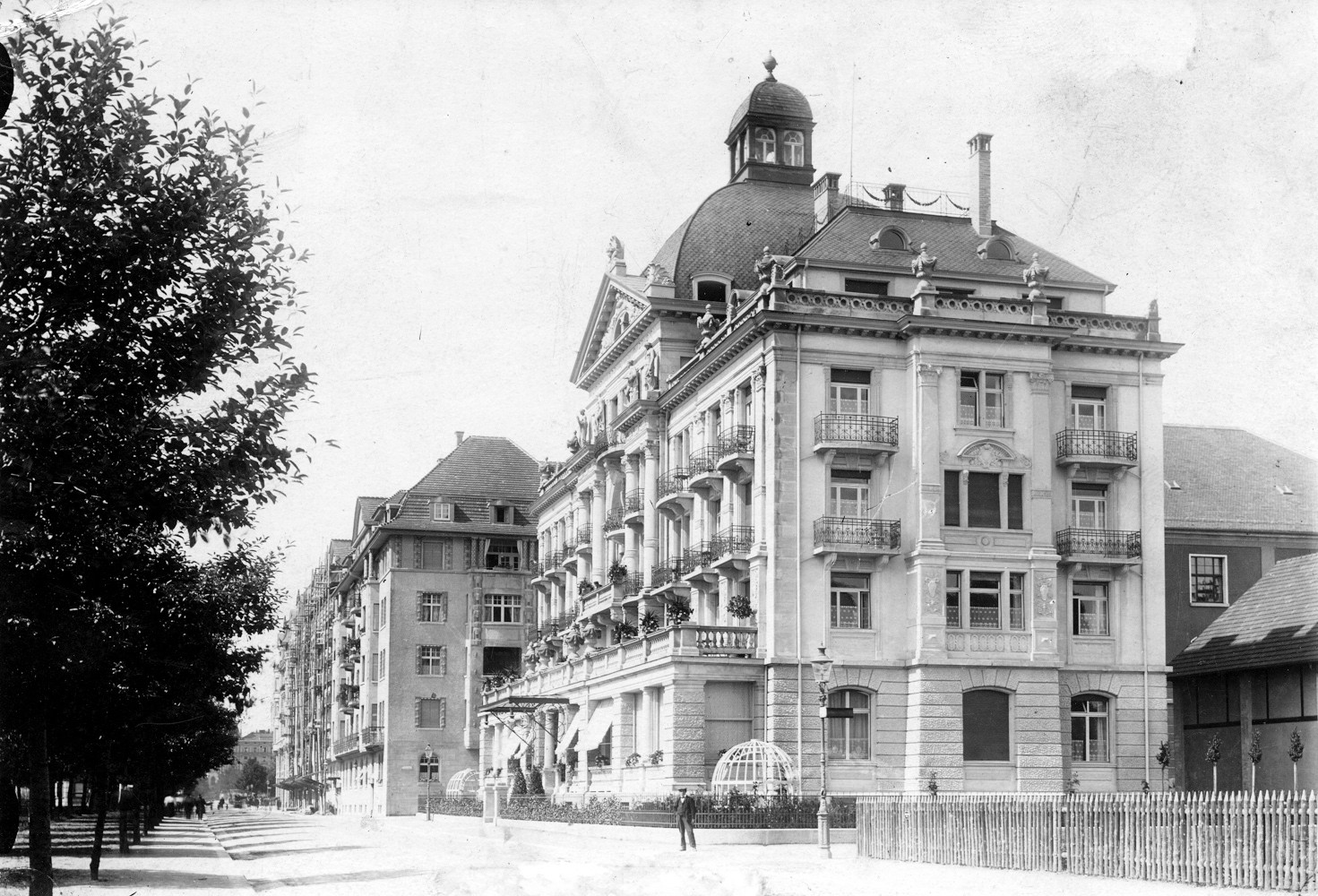 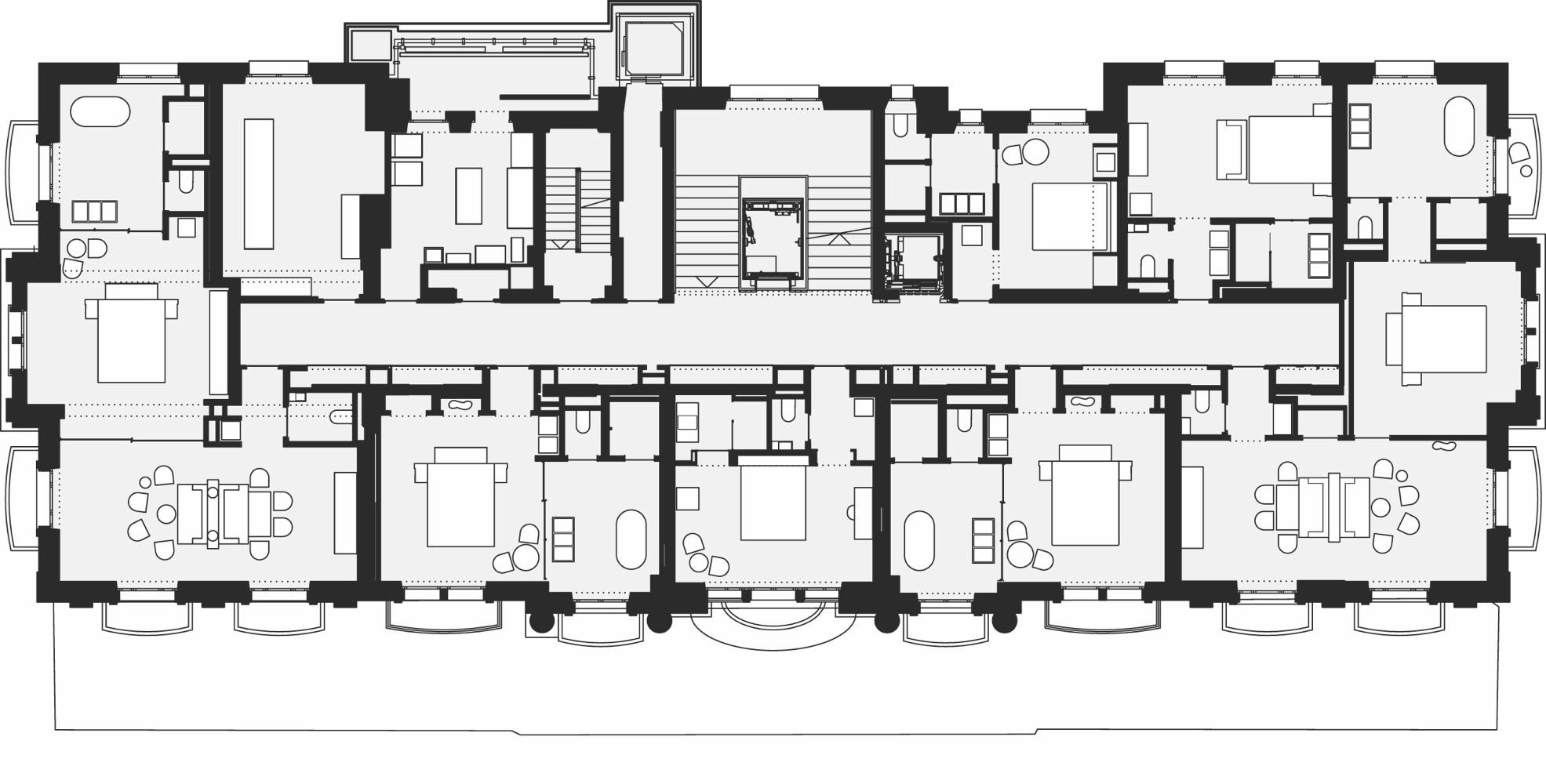 Michel Reybier is an enthusiastic sailor, and he hired another enthusiastic sailor: the architect and designer Philippe Starck. No wonder, then, that the two chose the yacht as the leitmotif for the proud house on the lake. While the ship motifs appear as individual accents in the rooms on the ground floor and in the hotel rooms and suites, the theme spreads out in all its glory in the dome room. The room envelope of the Muña Restaurant, which is impressive for its dimensions alone, with the two lateral roof terraces, is like a yacht club or rather like an upturned wooden ship's hull. Old rowing boats hang vertically down from the roof lantern, and ropes run along the beams. The 'yacht club' under the dome is accessed from the ground floor by a glass lift in the eye of the historic staircase. As the backbone of the building, the lift stages the path from the bottom to the top - from the hall through the floors of rooms to the roof - in several ways: those who ride it upwards catch a glimpse of the individual floors and, above all, of the coloured glass pictures designed by Starck's daughter Ara. If you prefer to take the stairs, you can experience the spatial sensation of climbing up the wide wooden staircase on the upper floors. However, this does not lead up to the roof, but only to the top floor of the room. The ceiling above is a fire compartment, so that a separate staircase provides access to the attic. Only the lift penetrates this ceiling - which was a special challenge in terms of fire protection. One rides in the glass cabin from the bright, open stairwell into the dark roof space, and is thus prepared for the special atmosphere of the 'yacht club'. So that the roof truss is not exposed to the loads of the lift and its vibrations, the drive was arranged below like an anchor in the pit. 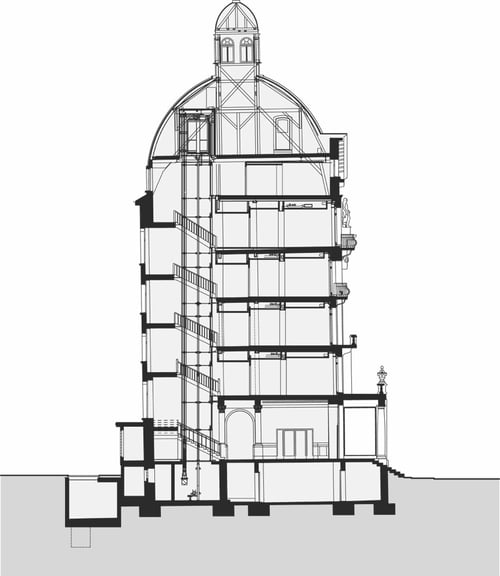 The pitfalls of the subsoil
The lift stands vertically in the eye of the stairs - as befits a backbone. At La Réserve Eden au Lac, this is not a matter of course. If you take a close look at the building and focus on the details, you will notice that not everything that appears to be vertical is actually vertical. For example, the lights in the hall, which are attached to wires, hang vertically in the room due to gravity. The pilaster behind them, however, is crooked. This has nothing to do with the yacht motif or even seasickness, but it has a lot to do with the lake. Like all houses on the shores of Lake Zurich, the Eden au Lac stands on heaped-up land and thus on ground with little load-bearing capacity. As a rule, hundreds of wooden piles were driven deep into the ground (1800 in the case of the opera house) to provide a secure base for the foundations. When building Eden au Lac, architect Christian Scheel wanted to be modern: the construction company Franceschetti and Pfister poured a concrete slab over the entire base as a foundation. "There is no doubt that this method of foundation will prove as good as in America, where it has long been known," wrote the 'Neue Zürcher Zeitung' in the summer of 1907. However, far from it: the concrete slab was not on safe ground, so that the house soon tilted backwards. 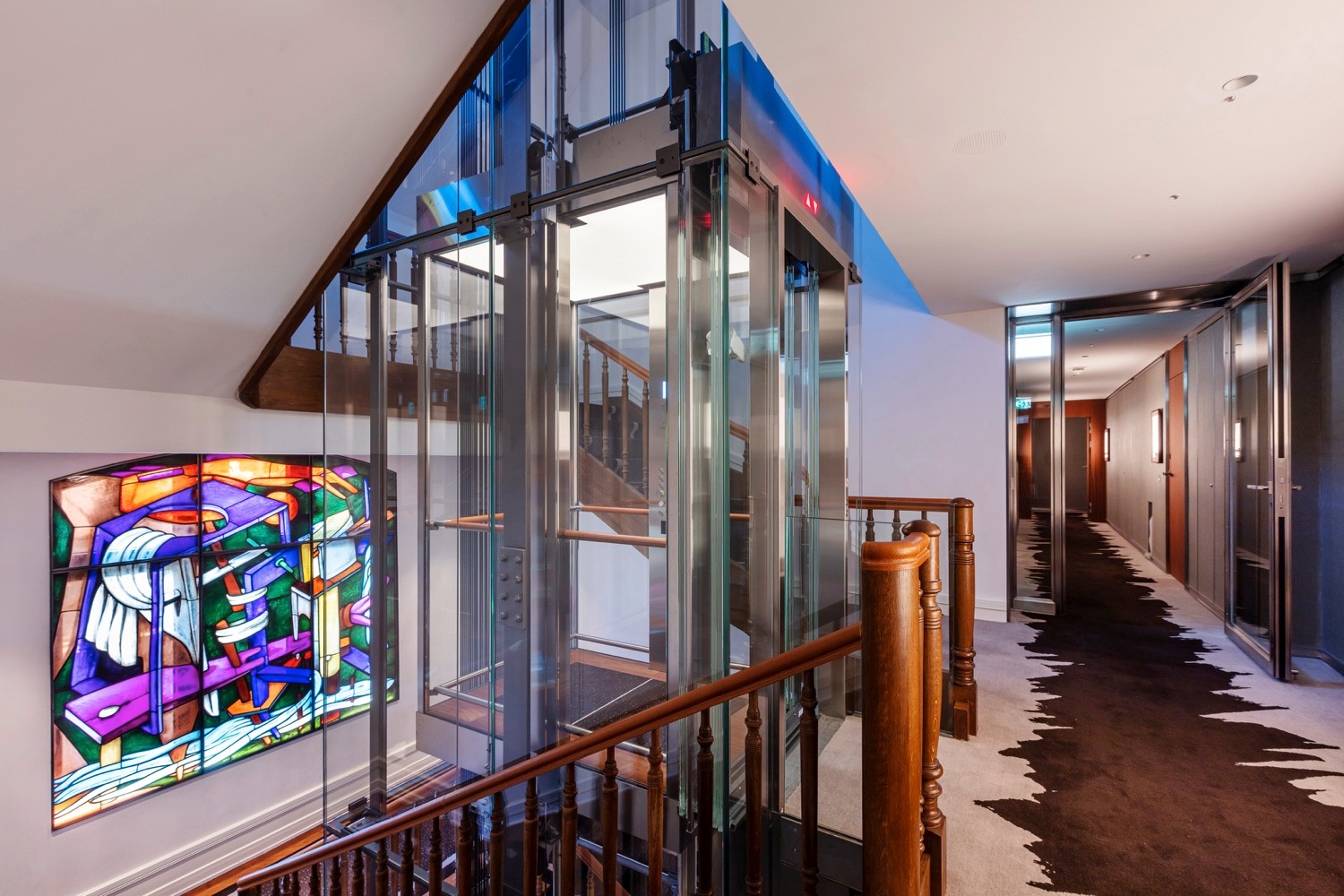 Turbulence at the beginning
This instability can certainly be understood symbolically, because the beginning of the Eden au Lac was not under a lucky star. Because the construction company was liquidated, the house could not receive its first guests in the summer of 1908 as planned, but only in June of the following year. Initially, it was not planned as a hotel for passers-by, but as a family hotel in which guests could rent entire flats. In the 1920s, a cooperative took over the house and initially continued to run it successfully. However in 1936, during the economic crisis, the house was auctioned off by the bankruptcy authorities and acquired by the Schweizerische Bodenkreditanstalt. Rebuilt by architect Hermann Weideli and equipped with the first lift, it reopened the following year. The building was now under the management of Arthur Louis Thurnheer, who was also able to buy the property in 1947. In the 1960s, the Bärtschi family took over the management of the Eden au Lac, whose second generation ran it until summer 2007. The Victoria Jungfrau Collection had already taken over the hotel palace on the lake in 2005. 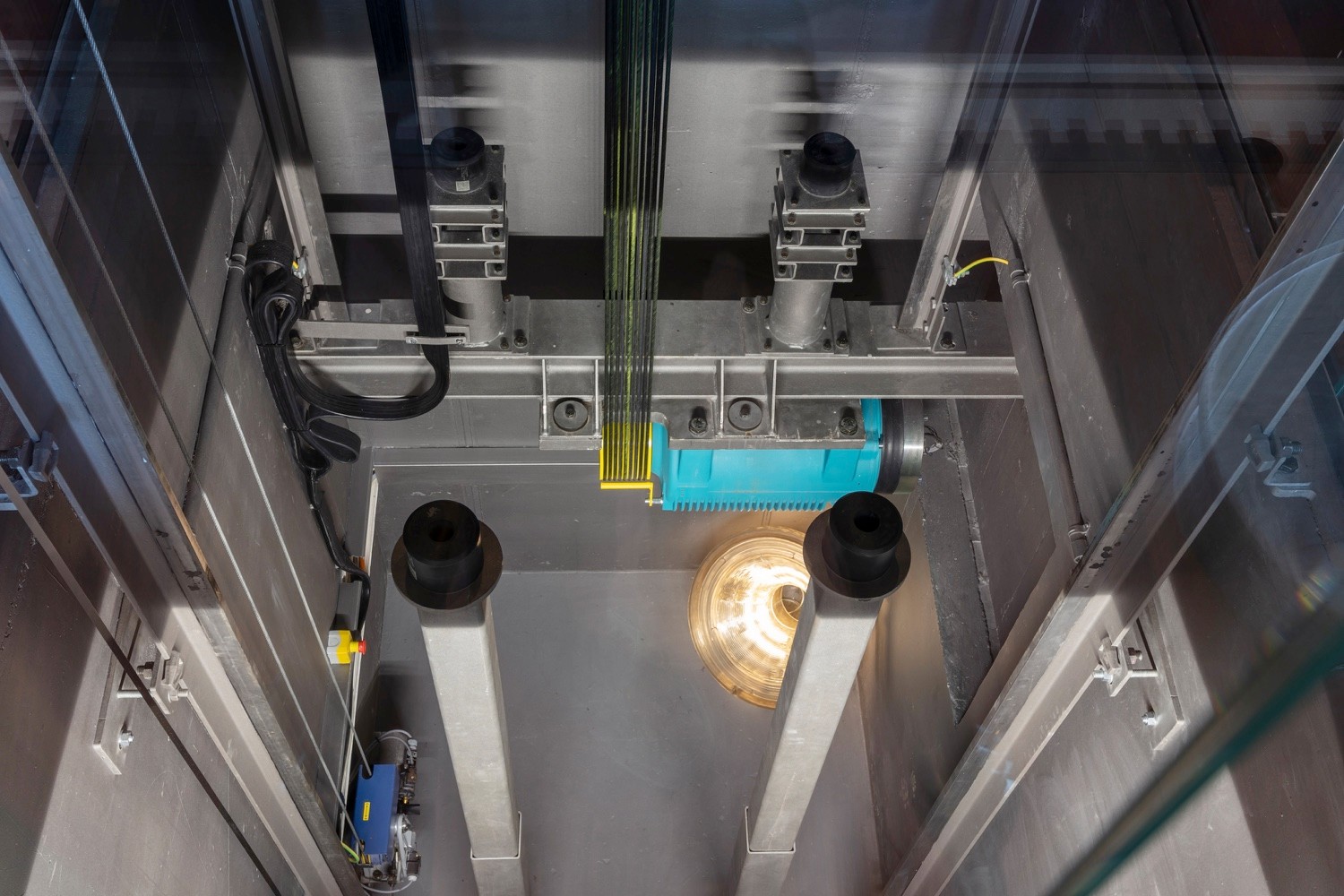 Saving the dome
Over the decades, the hotel was repeatedly modernised and adapted to changing needs. Grand plans were presented in 1973: the roof including the dome was to be replaced by a towering, two-storey hipped roof. This would have created space for more rooms, but would have fundamentally changed the character of the house. Because of feared compensation demands, the city council only half-heartedly supported the preservation of the building. So it was that finally the canton decreed a ban on demolition of the dome in 1974 - explicitly to protect the townscape on the lake. Five years later, work could begin on the modified project: the dome and the entire attic were demolished, but rebuilt in a slightly different form. Thanks to a slightly different angle of inclination and an increase in height of 30 centimetres, new suites found space under the roof on both sides of the dome. The dome room itself remained unused - until Philippe Starck's 'Jachtklub' found its home here.